Creation The Film about Darwin

I had a feeling this film might surprise me and further my knowledge about Darwin, whilst focusing on the man behind the name – it didn’t. 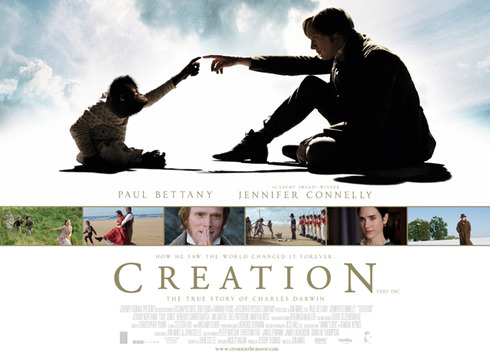 The reviews I had read of the film sparking fresh debate on the theory of evolution, just goes to show the power of film, rather than what is actually shown.

It sets out to explore the depression and conflict Darwin experienced after his daughter’s Annie’s death in 1951.

Largely set in Darwin’s country house in Kent, it paints a bleak picture of this time when he cannot write, for fear he will ostracise himself from his Christian wife.

During this period the relationship he had and still has with his daughter Annie takes privileged place. With Annie’s understanding of the natural evolutionary process being in line with his discoveries of natural selection.

However, this relationship did not work for me as I kept getting tired of Annie’s performance and the interpretation that Darwin had spoken to her as a ghost, which made no sense whatsoever to me. Martha West who plays Annie, is a delightfully pretty girl, who is surely great at more theatrical roles, but I couldn’t take her seriously in this film. I even started to dislike Jenny the orangutan because Annie kept asking for the story to be repeated again and again.

Sorry to sound scathing, but I just didn’t think it worked for what I was expecting. It was to hammy and montage heavy “Adam”, which can work but not for me.

The cinema however was delightful.

I believe The Regent, in Marple, opened 1938 and before that was a building of worship.  We had more leg room than star ship troopers and we were about a galaxy away from the screen, it was great, and nice to see so many locals going on a date to their local theatre.

The intermission and ice cream man kept with the old and brought it up to date with the new sex discrimination act. Lovely