Noel Coward’s 1930’s play hits Oldham Coliseum.  The divorced couple Elyot and Amanda are honeymooners with their new respective spouses when they meet again cocktail swilling on the balcony.  It takes all of five minutes for them to realise their erred ways and to escape the hotel in Deaville, leaving behind a bewildered foppish Victor and tartan clad Sybil to wonder what have become of their newlywed partners.

Coward is said to have written the play in four days whilst stricken with influenza in Shanghai, first off playing Elyot himself, and Laurence Olivier in the role of Victor.  The play premiered on 18 August 1930 at the King’s Theatre in Edinburgh. Five weeks later, when it reached the Phoenix Theatre in London the reviews became mixed.  I like the fact that it was said to be,

“amusing, no doubt, yet hardly moving farther below the surface than a paper boat in a bathtub and, like the paper boat, ever in imminent danger of becoming a shapeless, sodden mass.”

Agreeably or disagreeably, not much happens in terms of action, apart from a fair few raised fisticuffs between all the characters.

The beauty is in the change and turn of conversation, love which turns to sour, sour which turns to passion, and then the unflattering portrayal of what it is to be in a relationship and to be a person, hammed up for comic and dramatic effect.

Apparently the play has been made into a BBC Radio 4 broadcast with Helena Bonham Carter and Bill Nighy. In Toronto’s 2011-2012 Season, Kim Catrall is to play Amanda after already playing the London show.  The cast we were greeted with last night in Oldham were wonderfully convincing as the lavish characters, and the script stood the test of time to shock, giggle, and confuse.

Thanks to the youngsters of the Pathways scheme and their officerAmy Guest (he he),  for making it an extra special evening, I especially liked the suitably fitting middle class school uniform. 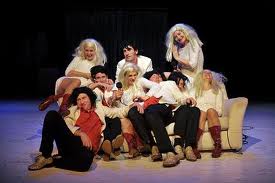 The stage is set with paper palm trees, Five men donned in white tuxes and four women in sequin frocks.  They play out a bizarre vaudeville style performance to Japanese lounge music, whilst wearing cheap synthetic wigs and speaking in distortedly over the top gender evoking voices.

I shifted nervously in my chair, as I had never heard of Forced Entertainment before and so when our first bubble girl tells us “we’re all going to have a big party,”  I wonder am I safe with my coffee?  The answer turns out to be yes and no.

The scene is set with cheesy cocktail swinging, a good degree of knicker flashing and groin grinding, and the end credits being rolled out in anticipation, reminding us that this is a show.  In being a show it sticks to the confines of the stage, but it leaves you aware that you could be involved at anytime, and also aware of where this own charade acts out in your life.

“Oops I fell over,” she squeals,

“it doesn’t matter though, I’m made of rubber.” Leaping up, to a kick of her red booted leg.

It’s potentially embarrassing and really really funny.  A character called Terry continues dancing to no music and the performers all manically chase around after the so called party, in search of the “great big amounts of fun,” which leak into the “I’m feeling very depressed,” voice of Tom.  She tells him to buck up his act, as she feels depressed too, “but nobody knows,” she says, with her fake hair and voice and rubbery legs.

“When was the last time you took the time to notice the little blades of grass?” she sweeps the floor, and I cringe at the line, the sentiment that means so much, but sounds so crass on the lips.

This is exactly what they play with, using the everyday naffness of language to talk in cheap ways about the important things.  The dreams of men’s sweat tasting of champagne and the clouds being made of candyfloss, it points to the quintessential cringe worthy nature of life when forced.

The performance feels both blatant and subtle at the same time, you are not sure if it is being really clever, or just poking fun.  The feeling it gave me is when I want to think about something that’s really difficult to deconstruct, do it with humour, do it with gibberish, do it with art in any form and then you scrape a little and break it down into a more manageable, but utterly baffling form.

As the show goes on and unravels, so to do the characters of the stage, “say something funny,” Jerry yells at Tom.  “Think of a funny fruit.”

Tom yells, “Banana,” he scores a nine.  “An apple,” a mere two, my brain scrambles as I instinctively think this is true, I try to make sense of this non sense grading system, I laugh at myself for being human.

The play is just this – a laugh, a study of the idea of play being the action of fun, albeit a poignant one.  It ends in the death of the funny fruit duo, who have a heart attack from the excesses they’ve endured, the taste it leaves is two polar ends of the spectrum, a blurred oneness and they dizzy off stage.

The performance prevoked starkly mixing opinions, as me and Amy both agreed it was quite something, we listened to others who loathed it and retracted the entire piece as gibberish.  Whatever it was it was definitely a lot of what you gave it, context being key, and the context for me sat in the thinking part of my brain that humour and cheap tricks can do.

Forced Entertainment began working together in 1984, they say that, “in the many projects we’ve created we’ve tried to explore what theatre and performance can mean in contemporary life.”